What does it mean to be me right now? Well, I'm writing this through tears. Not ones of sorrow, but tears of joy, of relief that the day I have waited for since 2014 has finally happened. You see, today a driver few people had heard of by the end of his rookie season, won a hard fought Xfinity race. I wanted to share my Alex Bowman story with you in hopes maybe it will make you a fan also!

In 2014, Alex Bowman was a little no name rookie running at the back of the pack. Few knew his name and fewer cared to learn it, but I was taken in by him and turned into a fan. His humor on Twitter and his general personality wowed me into believing he would do great things someday. 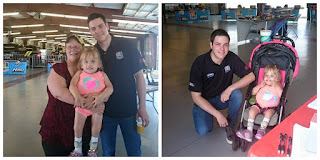 Some of you may know I have a daughter who is in a wheelchair. Savannah will be 6 in just a few weeks, but in 2015 she was a 3 year old who had never played outside. Her wheelchair wouldn't go through grass and she was scared to touch it (still is!) It broke my heart watching how my little girl wanted more than anything to live a normal life, only to have life throw more obstacles in her way.

One day, while cruising Twitter, I came across a news story about how Alex Bowman, Tommy Baldwin Racing and Go Baby Go were helping kids turn Road Ripper toys into mobility equipment for special needs kids. I tweeted them and thanked them for helping other children like Savannah. I did it, not expecting an answer or anything in return, but a month later Savannah and I got an invite to the Go Baby Go clinic at Chicagoland Speedway. We accepted, thrilled for a chance to meet my favorite driver! 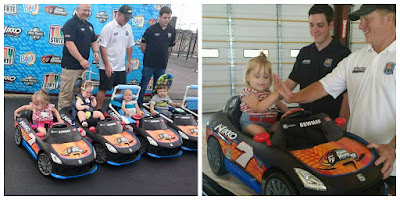 In June 25, 2015 my dream of meeting Alex Bowman came true. We drove the 2½ hours from West Lafayette, Indiana to Joliet, Illinois, of course, forgetting that Chicago was an hour behind us, thus arriving way too early. There Alex Bowman and Tommy Baldwin taught us how to modify a Road Ripper into something a special needs kid could control with just a push of a button. Some chose to build roll cages on their cars as well as other modifications, but Savannah's car was very simple, we just added a seat belt from a luggage bag strap to keep her safe. Though Savannah is missing part of her lower spine in addition to having Spina Bifida, she has always been very happy and healthy. We have been blessed by this. After we were done, the kids got to test their new cars, some smiling for the first time, others just laughing. Savannah headed out of the garage with a huge smile on her face. She knew right where to go, Victory Lane! It was a day I will never forget!


I've been there the whole time cheering Alex on! A loyal and dedicated fan. I've watched him through his days of running in the back of the pack, to last year when he nearly won Phoenix. There is so much talent in him and I believe he will go on to do great things! 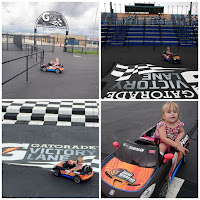 As for Savannah, she turns 6 on October 18th. She knows and loves NASCAR and says she is very excited to have Alex race next year. In the mean time, she enjoys watching races with me and occasionally trying to run my over with her Alex Bowman car! She has stated that it needs an 88 paint job for next year though. Alex's future is brighter than ever and I feel like I have spent nearly 2 years in limbo waiting for my driver to return full time. His win will remain a highlight in 2017, but I know this is nothing compared to how I will feel when he gets his first Monster Cup win!

Tonight, as Alex stood in Victory Lane, I feel like his future is really just starting. Alex Bowman will be a legend someday. Thank you Chip Ganassi for giving him his first win. Thank you Dale Earnhardt Jr for seeing greatness where maybe no one noticed before and most of all, thank you to his sponsors and to Rick Hendrick for taking a chance with him! Congratulations Alex! I can't wait for 2018!