I first met Liam Schuh when my daughter was a little over a year old. His mother Olivia Schuh had taken him to Riley Outpatient center to the Spina Bifida clinic. Liam was around 8 months. Olivia was a young first time mom, learning the ropes of a life I was growing accustomed to each day, the world of how to care for a special needs child. We ate lunch together and bonded because of our sweet precious children and a Neural tube defect  that had changed our dreams while pregnant.  Despite living an hour away, we have only met that one time. We do keep in touch via Facebook however. 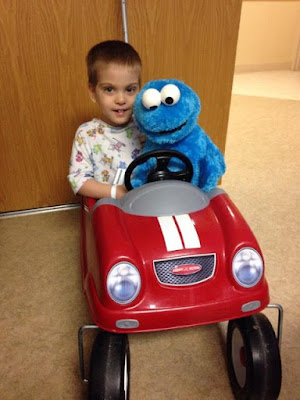 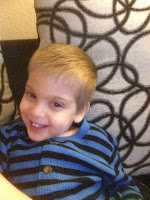 One of the major parts of having a child with Spina Bifida is they attend a lot of therapy.
"He has physical, occupational, speech, and feeding therapies going on right now," Schuh explains  "He will also have aquatic therapy in the summer."

Schuh says "Liam is in the chair full time right now, but we are trying to start him walking!"

On ,Thursday, May 11 at the Plainfield Verizon Store at The Shops at Perry Crossing Liam Schuh had a chance to meet Team Penske IndyCar drivers, Simon Pagenaud, Josef Newgarden, Helio Castroneves, Will Power, and Juan Pablo Montoya. 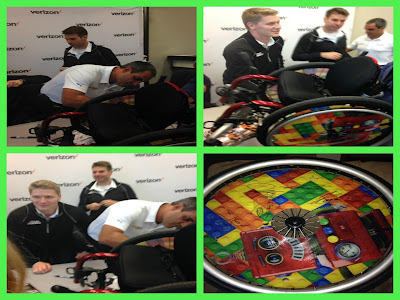 "This is his first time meeting a race car driver. The drivers were asking Liam if he liked to go fast and he said yes. They replied, "faster than us?" He said yes! He also got fist bumps and high 5's from the drivers. He was so excited to meet the drivers! He was giggling the whole time!!"

This is how you make life long race fans! But is there an IndyCar race in Liam's future?

"He probably won't go this year because it is so loud but we will most likely listen to it on the radio and watch it on TV. "

I want to send a special thank you out to Team Penske  and the IndyCar series for having so many amazing and kind drivers, especially when it comes to special needs children. I believe if you can't run with your legs, then you should run with your heart!