Indy 500 preview Sage Karam Young and talented beyond his years.

First of all, let me start by saying, YES I AM A BIG SAGE KARAM FAN! I first noticed him in the 2014 Indy 500 where he raced to 9th using a style I have not seen since the 1990's. Back then it was a young Greg Moore. Sage, much like the memories of my childhood favorite, shows no fear and takes risks other drivers would never dare to make. This, along with many other reasons, are why Karam is my 2017 Indy 500 pick to win the race.

Many fans, however, disagree with me. Some going so far as to believe Karam will never return to IndyCar full time. I can't or won't believe that to be true. When the time is right, and it wasn't right in 2015, Karam will take IndyCar by storm. He will be an Indy 500 winner and an IndyCar champion! Let's look at some career facts on him:


This year Karam comes to us after doing quite well in IMSA with Lexus. Sharing the car with veteran driver Scott Pruitt has taught him a calm like that we have never seen in him before. That, combined with his last 2 horrible 500 finishes, have helped him to mature. This year I believe he will take his time and hopefully, with a little luck, make it safely to lap 200. But, hey, I'm just a writer. No one cares what I think. So, lets hear from the fans. Some love him, some don't, but options and opinions are what truly make this sport great, right? I asked the following questions to the members of the Facebook Group Elite IndyCar:
What do you think of Sage as a driver in general?

Sage is now in IMSA full time and says he is happy there . Do you think he has a future in NASCAR or IndyCar? Why or why not?

DDR is a very good team. They put all their resources into the Indy 500 but should they consider going full schedule with Sage or another driver? Why or why not?

Lastly, how do you think Sage will finish in this year's race?

And here is how they replied:

Kurt Winkleman: First impression; Sage is a hard charger with a ton of slightly untamed talent. The fans have been harsh and unfair in their assessment.

Paul Reams: Lot's of talent, a lot of bad press. Good hard charger who needs a calming influence, which he should have gotten from Dario during his first year at Ganassi.

Ray Jump: If he can harness the charges for late in the race he'll be fine. I wouldn't want him to run DDR though full time bc that would eventually damper his ability because the car maybe good at Indy but from former DDR teams they are awful everywhere else..... Win Indy and parlay that into a better full time ride example: Schmidt or Penske possibly. I'm personally not a fan but the kid has talent

-Aggressive but not overaggressive
-IndyCar yes because he's said that's still his main goal and he's already proven he can drive
-Yes because it's Indy (and just look at my profile photo)
-Full schedule with Sage. They've been a full-time team before and there's no better young driver without a ride currently
-Between 3rd and 10th

Jeni Rebecca Harris: I'd love to see Sage try Xfinity or Trucks but as long as he's happy, that's OK with me. I just hate that he still blames himself for what happened to Justin Wilson


Terri Rogers Zumbrook: I thought he had great potential but needed to lose the reckless attitude. He seems to have matured in that regard, but I am wondering who will give him more than a one off opportunity. He's too young and talented to write off, and he would have been challenging Josef for rides had he been better mentored or more disciplined. He certainly would have been given better opportunities than folks like Conor.

Keith Waye Well, in my opinion which is very different from other's is that to date Sage has yet to prove that he: is too driver. I'll give you that he is going and has not had time to race in a lot of events. He is also a crasher. He was leading at Pocono and crashed. He was moving up early in last year's Indy 500 and crashed. So until he can get a car to the finish I can't be on his bandwagon.

Shaun Patrick: I think Sage is a tremendous driver and the reason for this is his ability to be diverse in many different type of Motorsports and still be competitive. 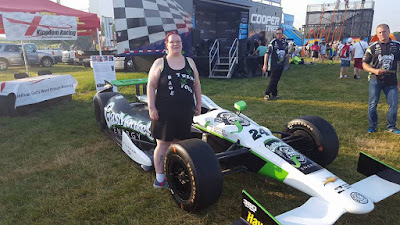 He definitely could have a future in INDYCAR.. of course if he's given an opportunity to be in a car for more than one season and build on that. If that's his goal, I think it he can make it happen.

I predict a solid top 10 in this years Indy 500. The car has speed and has showed that in Monday's practice. As long as he stays out of trouble, I don't expect him to stay back in the pack.

Danilo Nardini Mancini: As a Driver: Yet to prove his talent
Future in NASCAR or IndyCar? Sure. In the US is quite easy to change series, but I think he's not moving out of it.
One year team and Driver win? Sure. But is so rare for that to happen, that you can't simply count on it.
Full Schedule for DDR? Sure. Indy need a grid with more cars and teams, but I don't think sage is a driver for an entire season. They should run with a more experienced driver.
Finish? On the wall.

Rick Ravon: Sage is the future of the sport. He is a superstar in the making. He has the potential to transcend the sport like Muhammad Ali transcended boxing or Michael Jordan transcended basketball. He is handsome, well spoken, and lightning fast. He comes from a good family, he would be a great influence for today's youth. He is going to shock the world on Sunday, and when he finally gets the chance to go full time, when he breaks through and wins that first race he is going to be more dominant than Scott Dixon. I've also said this many times, I worshiped Rick Mears since I was 12 years old. And when he retired in 1992 there was a void. That void could not be filled by anybody who was just ordinary. When Sage came along, he just had that certain something and I liked him right away. I haven't been this crazy about a racer since Rick retired. Every time Sage races, it's like Christmas day for me. I can't believe I still have a good 20 years or so to watch him and cheer him on!

But one fan I feel said it best of all!

Eric Kalmus: Every year he matures in age. He will grow faster and faster. Definitely the future of the American drivers.

So there you have it. He is young, talented and looks amazing without his shirt! Sage Karam is the real deal. He has faced controversy in his career and overcame it. He will get his shares of boos, but all the great drivers do. You live and learn and move forward. I believe Karam can move forward and show the IndyCar world what I have known from his very first Indy 500. Sage belongs in the world of IndyCar!