Every NASCAR  fan has a story to tell, And with their story comes a tale of their favorite driver and how they came to choose that driver. Every driver has a number one fan out there somewhere. I am on a mission to find each NASCAR driver's number one fan. From Jamie McMurray all the way to Michael McDowell, Let the hunt begin!

Today we begin our journey with Chip Ganassi driver Jamie McMurray. Known to be one of the best Restrictor plate drivers in modern history, McMurray has many fans.

"I've been a NASCAR fan since 2001, when I was 8, and became a McMurray fan when he won at Charlotte subbing for Marlin I like underdogs and he's kind of been one his entire career. He seems humble and shows emotion. I'm excited about this season with the speed Ganassi cars have shown. With the 42 winning, I'm hopeful that Jamie can win soon too."

Let's meet a few other fans! Of the 3 fans we will meet today, one can be crowned his #1 fan!

We start today with Cheryl Reed, 44, from Lancaster, Ohio.

Reed says, "My name is Cheryl Reed, I am 44 years young, living in Lancaster Ohio.
I began enjoying NASCAR in the mid-nineties. It didn't take long to become a real fan. At that time, I didn't have a favorite driver personally period just really enjoyed hanging with other bracelets not to mention the beer and the wings.

When Jamie McMurray building for Marlin in 2002 I was impressed. Not to mention he was a cutie. By 2003 I decided he'd be my person/ driver. Naturally winning rookie of the year was super exciting! I have never suede from knowing he'd always be my favorite driver! I had number 42 diecast and jewelry, it was awesome.

My biggest dream was to attend a race and meet him. However attending a race wouldn't come for quite a while and honestly, I'm still waiting to meet him in person.

In 2006 to my huge surprise I saw the number 26 hauler in my hometown. Wow! I pulled in and with more excitement the necessary bake the driver to let me see the car, it was 10 p.m. at a BP gas station haha he obliged me and invited me to hang out the next day where he would be showing the car. Yippee! I spent several hours the next day with "the car." I took many pictures and was happy. The driver promised me an autograph piece of Jamie would be mailed to me talk about WOO HOO! I did receive that picture.  To my devastation, however , it along with the 42 diecast car or lost in a move. Traumatic!

Fast-forward to 2015 finally I got to my first race Charlotte October night race. Can you believe it? It's pouring down rain and it isn't slowing down! Race postponed Ugg waiting one more day ... Sunday beautiful weather, let's go racing! During interdiction finally it's Jamie turn. His four-year-old son yells, "in the # 1 McDonald's Chevy is my daddy Jamie McMurray!" I bawled my eyes out best day ever!

I have since been to Bristol in 2016 April comma where I might add I got engaged to a wonderful Tony Stewart fan at the campground. Bless his heart knowing the race being my favorite activity and him being my favorite it was perfect,the whole Camp cheering! I'm lucky I have been able to visit his race shop and see him on the track in person twice. The only thing I have left to complete is a face-to-face meeting and I am working on seeing how to make that come true."

What would Reed say if she could say one thing to McMurray?

" If I ever got to meet him I probably be in shock haha. I'd like to tell him he has and always will be my favorite beig for a picture with him and send him blessings for each and every race ahead of him.'
Sounds to me like McMurray is already blessed to have such an amazing fan like Reed!

Our next fan is Ashley Buddan, 27, from Twin Falls, Idaho. This is her Jamie McMurray story:

I've only been to one race, Las Vegas in 2010. It was the best day of my life. I've been watching NASCAR since 2002. My grandpa had it on and i just fell in love with the sound of the cars. My first full season was 2003, when Jamie was a rookie. I hadn't picked a driver yet and i was watching the anthem maybe and they showed Jamie and I just melted and was like, that's my guy!!! Been my favorite ever since. 14 years now! Sadly, i have not gotten the chance to meet him. I tried so hard in Vegas. However, when i went into the Neon Garage and saw his car for the first time, i cried. And then going to driver intros and them calling his name, I cried again. He was right there in front of me, I couldn't believe it. Its definitely a dream to meet him. One day, his Crown Royal #26 car came into town and I was late to work because I had to go see it!!

I have 2 signed diecasts, a 42 and a 26. I need a 1 still. I have tons and tons of other stuff as well. I attached my old bedroom when it was all decked out. Sweatshirts, shirts, cards, little toy cars, stuff i made in high school art class. I;m planning on a tattoo. I have race flags and want to put his autograph below it. My licence plate says JMACFAN which stands for Jamie Mac! Its my favorite. Whats special about Jamie is hes so humble and kind. He never has issues with anyone. Hes got a kind heart and is always positive,
even when he crashes. Hes just an all around amazing guy. I cant say enough good things about him."

I absolutely love Nascar and Jamie. Its what I look forward to every Sunday, even when I have to work, I'm a bartender at Applebees, I have a regular customer that comes in and he'll update me on where Jamie is at throughout the race when I'm busy. Nascar is my life and Jamie has been the best part of that for 14 years, and he will continue to to be that for me until he retires. 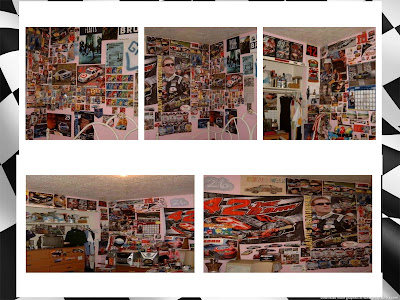 She believes others should also cheer for McMurray because "Others should be his fan because hes truly a great racecar driver and a great guy. He does charity work. He seems like a great teammate to Kyle Larson. He goes out and does his best every race. Hes a great choice and wont disappoint you!"

Her message to McMurray was hard to choose because there is so much she would like to let him know! "I think that I would want to tell him thank you for always being such a humble person and going out and trying his best every race. And that I'm so proud to be his fan"

Our last fan is part of the NASCAR youth movement but wait, he only likes McMurray, he's actually a Kyle Busch fan! Jon Peterson,17 explains.

I am 17 years old and have been to 2 nascar races (Homestead and Bristol) I been a NASCAR all my life grew up being a Stewart fan then became a Kyle Bucsh fan. Kyle remains as my number one driver however in 2009 I became a Jamie fan

Have you ever met Jamie?
I haven't met him however I’m hoping to meet him during the 600 due to the fact I am going to that track. Honestly I would just be one of those people that would get something signed and leave. I first became a fan because of Roush dumping him. I was rather frustrated with that team for doing what they did so he became my #2. I mostly like the fact that he wins when it matters in the biggest races.

Do you have any memorabilia that help you stand out from other fans? 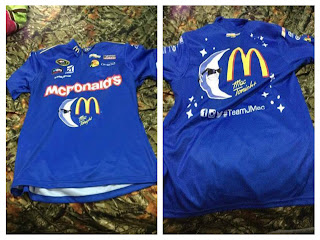 I have a 2016 “Mac Tonight” Darlington pit crew shirt race worn. There is only so many of these that exist

What is special about Jamie that made you into a fan?
Just him winning the big races

Why should other be a fan of Jamie McMurray?
How consistent he is.

And finally if you could say one thing to Jamie what would it be?

I’m a rather shy person. So I proudly wouldn't really talk to him

Our Trivia quiz will be between Cheryl Reed and Ashley Buddan. As always they hve been asked not to use google for the answers but to answer from the heart! Correct answers are in green and all answers can be found below the quiz! Good luck ladies!

2 How many wins does Jamie McMurray have in his career?
Cheryl: 17 (all 3 series) She is correct and since I didn't say what series, I gave it to her!
Ashley: Hmmm, he has wins at all my favorite tracks. Daytona, Charlotte, Indy, and Talladega. I want to say 6 or 7. I don't know if the AllStar race counts.. I'm going to go with 7.
Are you counting the Allstar win in your total for race wins or no? Cheryl was then asked to count it.
Yes I'm counting it.

3 What medical condition does Jamie McMurray's charity support?Cheryl: Autism
Ashley:  He has a charity that supports Autism that he started because of his niece.

4 Jamie McMurrey is one of only how many drivers to have won the Daytona 500 and the Brickyard 400 in the same year and what year did he do this in? This question has 2 answers you wil get a point for each answer.)
Cheryl:  won 2010/ one of 3 drivers
Ashley: Oh man, I want to say he is one of 3 people to ever do this. He did it in 2010. I have the DVDs of these wins

5 How many Xfinity Cup wins does Jamie McMurray have?
Cheryl: 8
Ashley:Oh man, I honestly dont know. 9?

6 What year did Jamie McMurray win his only Camping World Truck race?
Cheryl:  2004
Ashley: 2004! I remember this because me and my little boyfriend at the time had a little bet and he lost. Haha.

7 One of Jamie McMurray's kids was born on a holiday. Which child was it and what holiday was it born on?
Cheryl:  Son Carter Born on Thanksgiving!
Ashley: If I remember correctly Carter was born 2 days before my birthday and my birthday is always around Thanksgiving so Ill go with Carter. 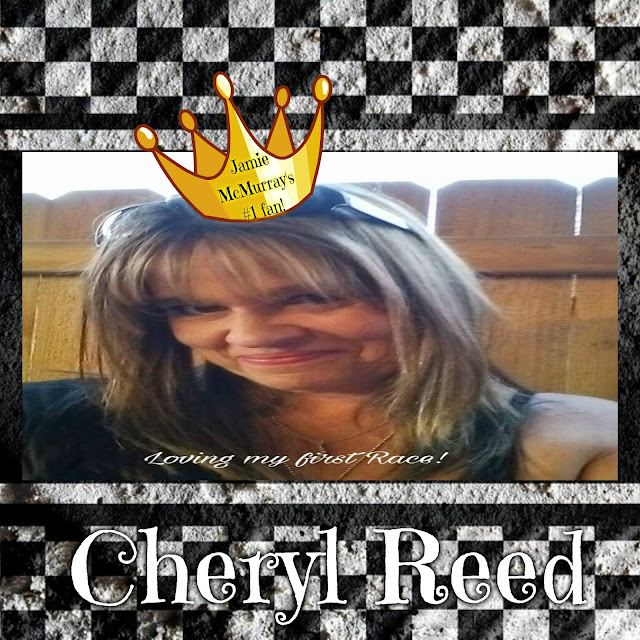