Nick Vincent: Aiming for the stars!

Nick Vincent is a young Indiana racer who dreams of being in the Indy 500. He currently races at Whiteland Raceway Park and is a competitor of one of our racers from last week, Hunter Alltop. Nick has bee racing since he was 14, though he didn't try an asphalt until his senior year of high school and just added road courses last year.  Welcome our driver of the week: Nick Vincent!

1) How did you get started in racing and what series or tracks do you race on regularly?

I got my start in a badly painted black and red kart back in 2011. We had the kart given to us by my papaw's friend. We were just playing with it one day to see if it I was scared of it. I wasn't even close to being scared. I was hammer down the second lap in it at Cera Land in Columbus. After that we saw that the Columbus 4H Fair Grounds were having their fair race. My papaw and I came up with the bright idea to race it. That week I made my debut and finished in 6th. Now, I'm in the Yamaha can lite at Whiteland. We race at New Castle once in awhile too. 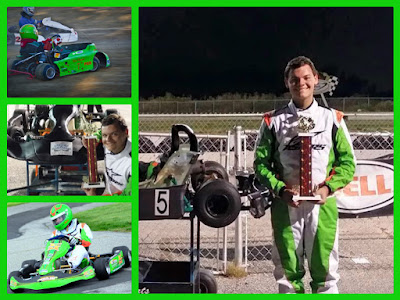 2)  Tell me a little about your car number and how you chose it?

I drive the number 5. I started out in the number 7 and have drove a number 24, but when I got the kart I'm in now I changed to number 5. I chose 5 because my older sister wore 5 in high school volleyball and my younger sister wears it for basketball so it seemed like it should be a sibling thing to be 5. Plus my first night out with the number, I finished second, so it stayed.

3)  Who sponsors you and why are they special to you?

I have a quite a few sponsors. K&L Machining is a big one, Pete Knue (owner) is a family friend and let's us park our trailer at his shop. He has been there since the very beginning. Tony Ogle Expediting and Drain Master are both owned by a good friend who helps when he can and would do anything for us. He has also been there since the very beginning. John Staple's Custom Pipes and Mufflers jumped on board last season and helped a lot with funding. John and his wife Katherine are very nice people. Thirty-One Auto Group helped us a lot with mounting tires and is ran by some good buddies. Taiterbuilt is awesome when we need something welded. If we need jack stands we know where to go. The Hornet Factory guys are more than friends, they're family. They'd do anything for us in a blink of an eye. Eighth Day Riders is a motorcycle group who does charities and rides to raise money for people. They're awesome with the things they do! I can't thank ALL of my sponsors enough without them, NONE of this would be possible. I'm also looking for more sponsors!

4) Who has been your biggest support throughout your career?

Everyone in my family has been pretty supportive. My biggest inspiration to be an IndyCar driver was a man named Richard Wertz (Unkie). He knew everything there was to know about the Indy 500 and was always telling me stories about Indy 500's from the 50's, 60's, and 70's. We always talked racing and IndyCar. He was a huge AJ Foyt fan. He and his wife, Rita (Aunt Sis) both sadly passed away earlier this year. For them I want to make it to IndyCar so much more!


5) Is there a famous race car driver you like to compare yourself to?  Who and why? If you don't
compare yourself. to another racer,  who has been your racing inspiration and why?

I'd compare myself to Sage Karam, because I'm just so aggressive in anything I drive and good with fans. I do envy him, because he started his first Indy 500 at age 19, in 19 now and still in karts, but hope to climb the ladder like he did in the Mazda Road to Indy.

6) What was the scariest moment in your career and did. it change the way you race?

I had a real hard hit in my first ever asphalt race. It was the Halloween 200 at Fast Track in Emison, Indiana. I started last due to missing qualifying and I was trying to move through the field as quick as possible. I was up to around 8th and I came off turn 4 on around lap 145ish. The rear of the kart stepped out and I went to catch it. When I thought I had it, it spun and I back ended the wall. I almost came out of the kart and it almost flipped. My hit actually put a hole in the wall. It hurt but I did finish the race in 9th. It didn't really change the way I drive because, stuff happens.

7) What advice would you give a young kid wanting to be a race car driver?

Go for it. You only live one time, so do what you love. Never stop improving yourself on and off the track. Always stay humble, no matter how good you get. Never think that you got to where you are by yourself. You got there with the help of others and that's how you're going to grow in the sport.

8)  If you weren't driving a race car, what do you think you would be doing with your life?

I honestly have no idea. Racing has been my life since I can remember. Three fourths of my toys
growing up were diecasts of Nascar, IndyCar, monster trucks, and dirt late models. Racing has always been me.


9) What is your biggest moment in your racing career?

Definitely racing RoBo Pong weekend last year at New Castle. I didn't race the RoBo Pong 200 but I raced the Yamaha class that weekend. I started 21st and finished 20th. I know that doesn't sound amazing to people, but I was just happy to be racing on that big of a stage against some of the best kart drivers in the world. This year I hope I can find a team or the funding to race the actual RoBo Pong 200. Fingers crossed!

10)  Where do you see yourself in 10 years and what will it take to get there?

In 10 years, I see myself on the starting grid of the 110th Running of the Greatest Spectacle in Racing. I hope I can make it there before then but I'll be patient and let God lead my path. I hope to be the first 5 time champion of the Indy 500 and become a legend. Names like Foyt, Andretti, Unser, and Mears are names that make you think of the Indy 500 and the history of the Speedway, I'd like to add the name Vincent to that list!

Sometimes the road to where you want to be as a racer is much longer than any race ever will be. There are many twists and turns along the way and often times, a wall. It takes a lot to make it to the top of your game, but when you have a dream, sometimes you have to follow it all the way to victory lane!
Posted by Chanda at 5:37 PM