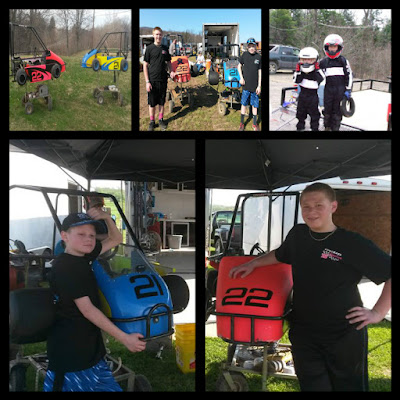 With the support of their parents, Cody,14, and Dawson,12, Contrael are living a dream and winning races all while making a name for themselves.While they are young, they are determined. Remember these names, they are the future of racing. Many thanks to Jammie and Tom Contrael for providing the photos for this article and granting permission for me to write about their family.


1) How did you get started in racing and what series or tracks do you race on regularly?


Cody:Well I got started when I was only 8, back in 2010 and also my uncles raced everything from karts to 305 sprints. I race with the Western PA Mini Outlaws for Jay Fry Motorsports and sometimes my dad's kart which I actually recently flipped and that was my main track Blairsville Speedway.

Dawson: My name is Dawson Contrael. I am 12 years old and just began my 7th year in racing. My mom took me to my first race when I was only 2 weeks old and I have went to Lernerville speedway weekly since then. When I was 4 I got a dirt bike for Christmas then when I was 6 years old, spring of 2010 I got my first cage kart. I ran kid cage class for three years. My third year of racing Paul Caletri lent my dad an animal engine for me to use that year. I had ran a flatheat motor up until then. We sent it away to Todd Miller to have it rebuilt. That was my best year. I won my first race ever the first race out that year, that year I won 12 races at Blairsville Speedway, including the Biggest race at the end of the year called Octobefest and he won a 3 big trophy. I also won the track championship that year. The next year I moved up to Champ 2. I have ran mainly Blairsville Speedway up until this year. My brother got a ride in a mini outlaw kart this year so my dad go me one ready to race to. This class in run by adults. My brother and me are the youngest two in the class. Our first and only race so far this year for the mini outlaws was at Red Rock. That was a new track for us. I got 2nd in the heat and overall got 6th out of 10 karts but won in the Sportsmans class and there were 3 of them. He has raced his champ 2 kart twice so far this year and got 2nd and 4th.


2) Tell me a little about your car number and how you chose it?

Cody:I got the number 22 because me and my brother were actually just going to share a kart until my mom found this kart and it was 22 so I had that kart and my brother had the 21. But my main number this year will be 18 I didn't choose that it was just on there.

Dawson: I got my number 21 cause it was on the kart when we got it and my brothers kart had 22 on it so my parents said those were good numbers for us being racing season was just a couple weeks away so that was the number everybody knew me by.


3) Who sponsors you and why are they special to you?

Cody: The only sponsors I have are on the kart I'm racing for this year which is Fry's Garage and I really don't know the other sponsors. But my true sponsor would have to be my pap, mom, and dad. I also would like to thank Jay Frye for my Outlaw Kart ride this season.

Dawson: My Pap, Dad and Mom are my sponsors. They are special to me because they are always there to support me

4) Who has been your biggest support throughout your career?


Cody:The biggest support throughout my career would have to be my mom dad and pap again my pap rode with us to my first race mom never missed a race and dad helps me on the kart.

Dawson: My mom and dad have been my biggest support.

Jammie adds: Cody and Dawson dad works his but off each week so they can race and their Pap which is my dad is a Big supporter of their racing. Without Pap help we wouldn't be able to race as much as we do and Pap very rarely misses a race. He is 70 years old and got me into racing as a kid we went to Lernerville Friday then my brothers raced karts on Saturday and Sunday he has been at just about every single race in my boys 7 years of racing. He even had a heart attack in 2012 and he was at an WOO race that same week and was at my boys next race.

5) Is there a famous race car driver you like to compare yourself to? Who and why?

Cody:I would like to compare myself to Kasey Kahne or Tony Stewart because they have their strong days and their crappy days a racecar driver.

Dawson: Kasey Kahne is my favorite driver and I am like him cause he is a good driver and doesn't intentionally take people out.

Jammie adds Kasey Kahne was at Lernerville for the WOO race and my boys just went up to him and asked if they could get their pic taken with him. He is a really nice guy. I think they mentioned they raced but don't remember.He was busy working on his cars and we didn't want to bother him too much....when Kasey Kahne is ever there we just go right up to him and he has always been friendly. One night my boys even got their pics taken with him before and after the races and he was very nice and gave us no problem at all. We also seen him in May 2014 at Hendrick Motorsports Fan Day in Concord, NC. We watched him and all the other Hendrick drivers one at a time being interviewed on the stage and we were sitting second row from the stage. That was awesome. We have seen Kasey Kahne race one of his KKR cars at WOO races at Lernerville.

6) What is the best and worst part of racing your brother?

Cody: Well I'd say probably the best reason for sharing the track with my brother is that we can help each other to the wins both on and off the track we can push each other on big tracks and get to a big lead.

Dawson: My favorite part of racing Cody would be Beating him!!

Jammie adds: My boys even help each other out.....Cody ran two classes one night lastyear so Dawson was helping him clean his tires.

7) What advice would you give a young kid wanting to be a race car driver?

Cody:I do have advice for young drivers if your not first your last. Also kids "It's not the graphics and decals that make the move its the chassis that brings the kart around the track decals make it look good".

Dawson: My advice for a young kid wanting to race a car is get in and push the gas pedal and not the brake pedal.

8) If you weren't driving a race car, what do you think you would be doing with your life?

Cody:If I wasn't racing I'd probably be playing football basketball and baseball.

Dawson:If I wasn't racing I would be playing football and basketball because I also am involved in those sports.


9) What is your biggest moment in your racing career?

Cody: I actually have three one is my first win and two is my first flip which was this past Saturday and my first outlaw kart win which was in a stock 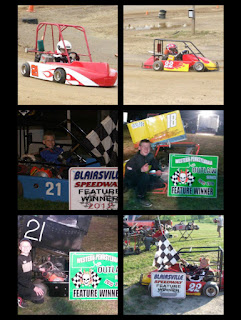 Kawasaki KX 250 that was at Redrock Raceway.

Dawson:My Biggest Moment in my racing career is when I got my first win.


10) Where do you see yourself in 10 years and what will it take to get there?

Cody:I see myself running half the World of Outlaws Sprint Cars and racing the full Nascar Sprint Cup Series schedule. It'll have to take responsibility patients and hard work.

A funny story I have would probably be last time I raced Champ 2 at Blairsville and my brother taking me out and pushing and shoving each other in the trailer.
Thank you for interviewing me Fast Lane Race News really appreciate it. 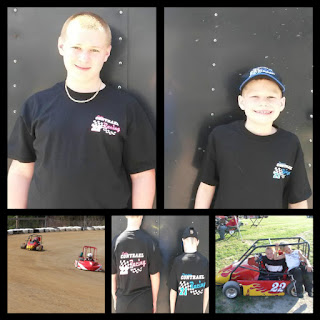 Dawson:My Biggest Moment in my racing career is when I got my first win. 10. In 10 years I see myself racing a Sprint car. My favorite part of racing Cody would be Beating him.

Family and racing have gone hand in hand as long as it has been around. It's nice to see families still working side by side and I look forward to seeing where the Contrael family is in 10 or 15 years, These boys and their bond, as well as their love and support from their parents will take them far.
Posted by Chanda at 8:10 PM